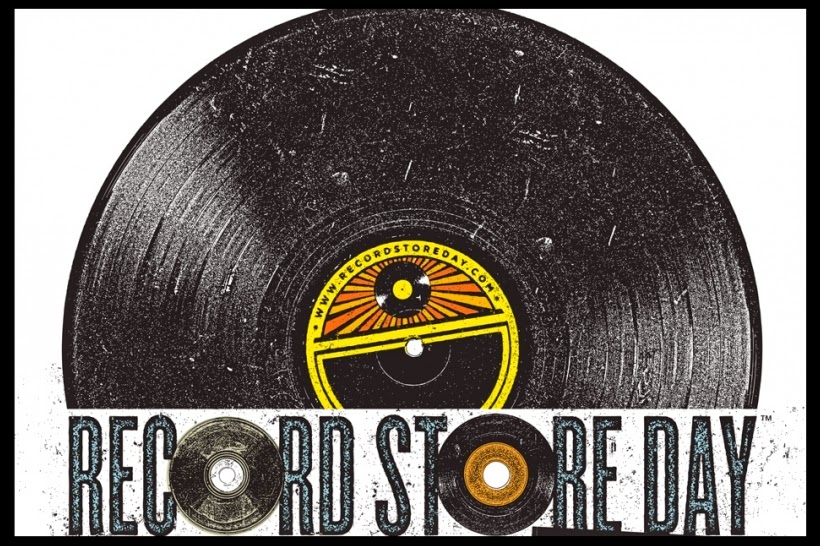 April 18th is Record Store Day!  I love the idea of Record Store Day. In my early years I would spend hours in small record stores, fingering through the bins, walking the aisles, going home again with a small pile of treasures. I spent my college years working in and managing an independent record store. Oh, the people I met, the music I was exposed to for the first time, the satisfaction found when introducing new music to someone, meeting the artists themselves when they wandered into the store while on tour.  I was fortunate enough to work in an area that was ripe with bluegrass and roots music and we also supplied albums for NPR’s international music radio show “Thistle and Shamrock” so I also got amazing exposure to fabulous British Folk, Irish, Scottish, Celtic recorded music and got a great education from DJ/curator Fiona Richie. Bela Fleck came through and did some shopping after just releasing his 2nd album. Doc & Merle Watson would come in on Saturdays to sit and listen to the new bluegrass albums released each week and lucky for us, Doc usually had his guitar with him. And there were so many others!  It was a terrific way to put myself through school. How lucky was I!
~ Bev

So what happens on Record Store Day? According to the founding organization’s website: “Record Store Day was conceived in 2007 at a gathering of independent record store owners and employees as a way to celebrate and spread the word about the unique culture surrounding nearly 1400 independently owned record stores in the US and thousands of similar stores internationally. There are Record Store Day participating stores on every continent except Antarctica.   This is a day for the people who make up the world of the record store—the staff, the customers, and the artists—to come together and celebrate the unique culture of a record store and the special role these independently owned stores play in their communities. Special vinyl and CD releases and various promotional products are made exclusively for the day and hundreds of artists in the United States and in various countries across the globe make special appearances and performances.

A Record Store Day participating store is defined as a standalone brick and mortar retailer whose main primary business focuses on a physical store location, whose product line consists of at least 50% music retail, whose company is not publicly traded and whose ownership is at least 70% located in the state of operation.  (In other words, we’re dealing with real, live, physical, indie record stores—not online retailers or corporate behemoths).”

Here’s a list of special releases that will be available with more being added daily.

“I feel like I spent most of my life wandering the aisles of record stores. I used to love going to Amoeba when our guitar player Immy worked there and hanging out all day talking about records. I think that's what finally got him fired; there were always people trailing around after him cluttering up the store trying to soak up the Immerwisdom. Actually, now that I think about it, I'm pretty sure it was when some kid came up to the cash register with a pile of records and Immy, who was sitting on top of the counter at the time, grabbed the pile, perused it, threw most of them to the side and said something like, "Forget these, you don't need them. These two are really good, that one is great. Now go to that rack over there and grab the new Gang of Four and the Pere Ubu album. That's all you need." It probably would've been cool if the manager hadn't walked up behind him just before he did it. Oh well.

The great thing about the best record stores is that the people who work there, like Immy, love music. They love to listen to it and they love to talk about it and they love to introduce other people to it. My favorite record stores in the world reside together on either side of a tiny storefront in Blenheim Crescent, just off the Portobello Rd in London. Minus Zero and Stand Out Records face each other across a three foot aisle and Bill Allerton and Bill Forsyth stand on either side of the aisle enthusiastically competing to play some of the best music you've never heard for anyone who dares come inside. Immy and I were directed there by friends at Mod Lang records in Berkeley (another stellar shop). They're only open a few days a week and they weren't open when we got there. Still, Bill A let us in. Four hours later, we staggered out under the weight of shopping bags full of obscure records by bands we loved but mostly by ones we'd never heard of. Bill A just played us record after record after record of amazing music and we soaked it up. We came back the next day to meet Bill F and it happened all over again. We literally had to buy extra suitcases. Now we're junkies. We never go to London without leaving at least 4-5 hours free to visit Blenheim Crescent and we NEVER go to London without an extra suitcase. I heard half of my favorite bands for the first time inside that little shop.

The fact is that there will always be good music. The only question really is how are we ever going to learn about it without guys like Bill Allerton and Bill Forsyth to play it for us.”
~ Adam Duritz (Counting Crows)


"I don't know if I'd ever have had the exposure to the roots and world music...folk, blues, classic jazz, gypsy, celtic, African, Latin, had it not been for combing the racks of the local independent record stores in the Cambridge/Boston area when I was in college and the years since. Those 'mom and pop' stores and small chains, like radio,  provided the rich soil from which so much of my passion and education sprang. Having the ability to linger and talk about selections with a staff person who really knew their stuff and was able to illuminate why certain albums by a given artist  were better than others or steer me to new exciting finds I never would have discovered without their help, is another reason why preserving these independent record stores is so crucial. It's the personal connection, the vastly more extensive collections, and being part of the community of like minded music fans, that makes such a difference. I loved striking up conversations or just spending hours reading notes on vinyl record covers and  having the visceral experience of being surrounded by so much history and variety.  Nothing like it. So much of what I love about music of all kinds and eras was hatched by just this kind of discovery and choice. The decisions about what to carry and the overall service of these stores is what has made so many of us who we are as musicians and people. Indelible, irreplaceable...and a treasure to protect."
~ Bonnie Raitt


"I found my calling in the back bin of a dark, dusty record store.

1975's K-Tel's Blockbuster 20 Original Hits by the Original Stars featuring Alice Cooper, War, Kool and the Gang, Average White Band and many more, bought at a small record shop in my suburban Virginia neighborhood, it was this record that changed my life and made me want to become a musician. The second that I heard Edgar Winter's "Frankenstein" kick in, I was hooked. My life had been changed forever. This was the first day of the rest of my life.

Growing up in Springfield, Virginia in the 70's and 80's, my local independent record stores were magical, mysterious places that I spent all of my spare time (and money) in, finding what was to eventually become the soundtrack of my life. Every weekend I couldn't wait to take my hard earned, lawn mowing cash down for an afternoon full of discovery. And, the chase was always as good as the catch! I spent hours flipping through every stack, examining the artwork on every cover, the titles and credits, searching for music that would inspire me, or understand me, or just to help me escape. These places became my churches, my libraries, my schools. They felt like home. And, I don't know where I would be today without them.

More recently, I’ve been fortunate enough to have the opportunity to rediscover this sense of excitement, that magical feeling of finding something all one’s own, by watching my kids go through it. Let me tell you: Nothing makes me prouder than watching my daughters spin that first Roky Erickson LP one of them picked out for their very own on one of our weekend trips to the record store. Or to watch the reverence they have as they handle their Beatles vinyl. How carefully they replace the albums into their sleeves, making sure they’re placed back onto the self in the proper sequence. Watching them realize how crucial and intertwined every part of this experience is, I relive the magic of my earliest experiences with vinyl singles and albums, their artwork, liners notes etc. all over again and again.

I believe that the power of the record store to inspire is still alive and well, and that their importance to our next generation of musicians is crucial. Take an afternoon (and some hard earned lawn mowing money) and please support them. You never know, it might change your life forever, too."
~Dave Grohl

So mark your calendar, find a friend, go to your local record store, and feel happy about keeping these shops in business. There’s nothing is like an independent record store and buying music off the internet from a faceless giant just isn’t the same.